When we moved to the Vancouver area, one of the things we looked forward to was being near to the location were they filmed Once Upon a Time. Our family took a couple of trips on filming days to be close to the action. Here's a link to read about one trip in 2017.

While watching the filming, I daydreamed about what it would be like to be part of a show. How fun to have your hair and make-up done, to wear a costume and to be part of a story-telling team. As much as I love writing novels alone, I sometimes wish I were part of a creative team. Now, whenever I drive by a filming sign, I have a little wisp of curiosity to be part of the show. This spring, I decided to try to be an extra.

I did a Google search on how to become an extra in Vancouver. I have since learned, the proper term is "Background". I submitted some photos and an application and found an agent. Thankfully, my husband agreed to be my photographer. Then, I awaited the day I'd get a call. 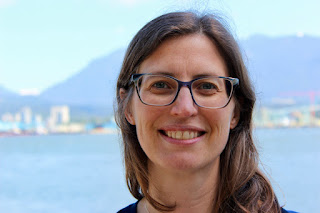 I was very excited to land my first call on August 10 to be on an episode of a new TV series called Family Law. I left my island on the 7:20 ferry carting a suitcase full of the required wardrobe and headed off to find the Background "Circus" in downtown Vancouver. (I would definitely use a backpack instead of a suitcase next time!)

I arrived in good time and was impressed with all the safety precautions, including a rapid Covid test, masking at all times, unless on camera, and hydrations stations. I was provided with a very cool costume and we had a quick trip through hair and makeup, which for me was a ponytail! I'll reveal my "character" when the episode airs on Twitter @austengurl, if you want to follow along.

After arriving at set, I was pleased to get put to work quite a bit, but there is a lot of waiting as Background. We could visit "crafty" at any time for snacks and drinks, but I think the best thing to do at this point is to get to know your fellow background workers. There are so many interesting people! 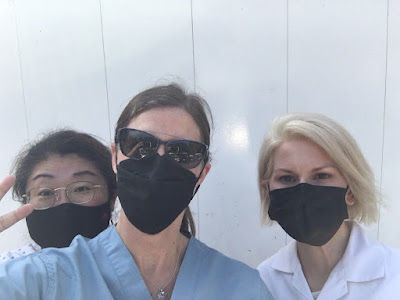 Laurie is a personal fitness trainer and make-up artist, who was also doing background for the first time, as part of her bucket list. Megan is a travel agent who hasn't been able to work in her field due to Covid with had a friend who told her to give this a try. These two became my friends and allies for the day. It was great to have someone to talk to, watch your stuff, and make sure you got a chair and a snack. I also met a gospel singer, a woman who got into acting to overcome shyness, a fellow teacher and writer, and some people who have been working in film since the 80's!

While on set, I developed a deep respect for how hard everyone works on a show, how many people are involved, and how much equipment is necessary. It seems like 12 hour days are common and most people were sweating, even though we were indoors and it was only 26 degrees. I can only imagine what it is like working outdoors when the weather is really hot.

"My" episode will probably air in the fall of 2022! In the meantime, you can be sure I'll be tuning into Family Law to find out more about this new series.

Posted by Samantha Adkins at 14:20