On January 2, I received an email from the editor at CKN publishers. This is not an uncommon occurrence for me. For about 20 years, I've been sending out short stories, poems and manuscripts. For the first years, snail mail was the only option for submissions -- painfully slow and expensive. Then email submissions became more common and now I send my writing almost exclusively via the internet. 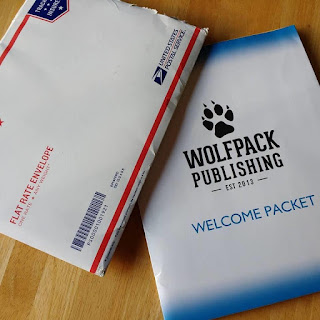 As usual, when I receive such emails, I took a breath, preparing myself for rejection, but then came
these beautiful words "We are interested in moving forward with publishing. . ." What?! I reread the email a few times to make sure I had everything right. Plus, they wanted to publish not just one but five of my books.

The editor sent along an 11 page contract for my perusal. We were travelling back from Christmas holidays and I read it on my tiny phone screen at the airport while we waited for our plane.

Two days later, I wrote back to accept the offer. Then I waited in suspense for the documents to arrive by mail for my signature. The package arrived on January 22 and that's when I finally believed it was real. That they would send the documents via Priority Mail meant they must be serious.

Since signing the contract, I have submitted an author photo and book blurbs for the five books. Today I received the first look at some of the book covers. Can't wait to share those! It's been a pleasant experience so far and I look forward to sharing the rest of the journey soon.
Posted by Samantha Adkins at 10:08