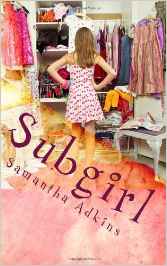 Time for another instalment of a chapter from one of my books.  I have previously posted the first chapter of Subgirl, which is written for middle grade readers.  However, this time, it comes with a new drawing as well as some critical thinking questions to be used by teachers, parents or young readers who want more interaction with the book.  I'm working on creating questions and projects for each chapter as a novel study.  Thanks to my colleague Kelli for the idea!  Here's the first chapter:


Chapter One:  Introductions
There are so many reasons why I, Jordana Simkins, am an odd twelve-year-old, it’s hard to know where to begin.  My appearance would be the first thing you would notice, so perhaps I’ll start there.
I’m taller than most girls my age.  In fact, I’m taller than many grown women, including my mother.  While I was at school, this was often an embarrassing fact, especially when I had to dance the polka with short Marty Henderson in gym class.  You’ll notice I used the past tense when I referred to my school days.  I’ll get to that in a minute.  But soon after my twelfth birthday, my height began to be an asset – which is something that is good and helpful. 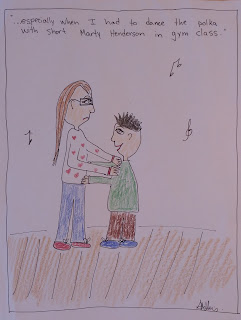 
Despite Ms. Trites’ best efforts, I will now enter the life of a substitute teacher before most girls start baby-sitting.  So, that brings me to today – my first day of teaching.

Why does Jordana think she is odd?
Write about why you think Jordana is or isn’t strange.
Find three interesting words in this chapter.  Draw a picture or use words to explain what they mean.
Draw a picture of what you think Jordana and/ or one of her parents look like.  Make sure you use the descriptions in Chapter One.
What adult job do you think you would be good at right now?  What skills do you have that would make you good at that job?

Posted by Samantha Adkins at 15:35