Not As They Appear 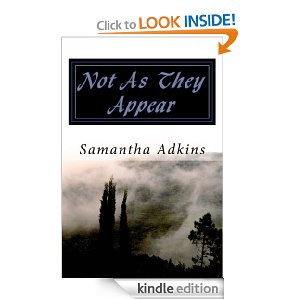 My new book is currently available on amazon and Kindle!  It is a real departure from my other  books - I would define it as middle grade, Christian fantasy.  At a book signing for my book Subgirl, my son lamented that I didn't have any boy books, so Not As They Appear is the result.

In honour of the release of my book to the world, I thought I'd post some of the first chapter here.  Enjoy!


Chapter One
My sister Jessica never saw the dragons.  Or at least she claimed she didn’t see them.  I kinda thought she was faking, trying to be cool and popular – but thinking back, maybe she was telling the truth.  She certainly wasn’t the only one who couldn’t see the dragons.

I remember the first time I saw one.  I woke in my bed, covered in dried sweat, my heart racing.  Terror gripped every nerve, but I couldn’t remember why.  Did I have a nightmare?  If so, I couldn’t remember even a fragment of it.  Perhaps someone had been in my room, but I was too scared to check.
Then I heard it – the horrid screeching like ten thousand nails across a rock.  Deafeningly wretched.  My heart thumped faster and I forgot to breathe.
I hid beneath my pillow, but the sound penetrated, barely muffled.  I called out to my mom – our mother, the one we had been fighting over since I was born, until we wore her down to a nervous point.  Our arguments deflated her, though we didn’t know this at the time.
For once, she did not appear instantly at my door.  Where was she?  I could always count on her at night.  Somehow, she could manage compassion and gentleness in the dark, though she couldn’t face it in the light of day.
The sounds continued at least a quarter of an hour and then ceased completely.  Though I was enveloped in panic, this did not translate to my limbs.  They remained frozen in my bed.  When the noises ceased, I finally emerged from my blankets, padded to my window and lifted the blind half an inch.
A giant yellow eye stared back.  I screamed, but no sound came out.  The eye seemed to xray my heart and soul.  I let the blind drop and bolted back to my island of imagined safety.  I breathed again, tears trapped inside, trembling myself to sleep.

The following morning our mother was gone.
“Way to go, twerp,” Jessica said over a precariously full bowl of fruit loops.  There were none left in the box for me.
“What?”  I whined.  “You ate all the cereal.”
She thrust a giant spoonful into her mouth and grinned at me through the colourful ohs.
“Yfph mph mopth leeph.”
I punched her in the stomach and she spit the partially gobbled cereal into my face.
“You’re gonna pay for that, you little brat.”
She chased me around the room and I didn’t even notice our mom was missing until it was time to go to school.
“Hey, where’s mom?” I poked my nose into Jessica’s room.
“I told you this morning,” she pulled a brush through her long blond hair.  “She’s not here.  I heard you screaming last night.  You must have kept her awake all night, like you always do and then she decided she couldn’t take it any more.”
I moved closer, worried.  “What are you talking about?  You never told me she was gone.”
She grabbed her backpack and stormed out of the room.
“Jessicaaaah,” I keened with the perfect inflection to set your teeth against one another.
She threw her hands up in the air and turned on me.  I slammed into her by accident.
“I’m not your mother,” she screamed.  “And I’m never gonna be.  If you made her leave, you’re just gonna have to figure out what to do with yourself.”
She left the house then, turning the key in the lock behind her.  I was four years old.  I’d never been alone in the house before.

Immediately, the silence creeped me out. I turned on the television.  After two episodes of PowerRangers, I called out:
“Mo-om!  I’m hungry!”  Nothing happened, which wasn’t unusual.  “Mooooooom.  Moooooooooom!”  I said her name with increasing length and strength of voice.
When I tired of this, I wandered into her room.  She hadn’t made her bed.  Nothing seemed to be missing.  Her purse waited on the hook by her door.  I rummaged through it until I found $4.87 in change.  I pocketed the money and stomped back into the kitchen.  Jessica hadn’t finished her cereal.  The colourful circles had bloated and disintegrated into the milk, turning it an awful greenish-brown colour.  I slammed the side of the bowl, spilling the contents onto the table.  I felt some sense of accomplishment.  Then I looked through the cereal cupboard for another box, but could only find a stale box of crispy flakes.  I hated that cereal, but grabbed a few handfuls to tame the knot of hunger and unease in my belly.  After that meager feast, I found a half-full container of grape juice and drank it straight from the jar.  I spilled some down my shirt and a few drops onto the floor.  I swiped at them with my Spiderman pajamas.  Then I found some marshmallows and chocolate chips in the cupboard to round out my meal.  I returned to the solace of the television again, lulled by the high-pitched voices and gun sounds.
Posted by Samantha Adkins at 10:08