I was fortunate to attend the North Shore Writers Festival at the West Vancouver Memorial Library this past weekend. It's an incredible opportunity and I am so grateful to the sponsor's for allowing anyone to attend for free. In fact, I'm amazed there aren't writers overcrowding the room, forcing the organizers to require registration.

I attended several of the Saturday events. The first was Writing Canadian Stories: A NSWA Workshop. Three writers shared their experiences writing about Canada. Sonia Garrett is a teacher and mother who wrote Maddie Makes a Movie, a novel for young readers. She was encouraged to set the book in the United States or elsewhere, but found the book wouldn't be the same without it's Canadian setting.

Sanford Osler wrote Canoe Crossings a book about the history of canoes in Canada. He was also encouraged to expand the setting of his nonfiction book, but found he had to keep his book in the country he knows and loves so well. I thoroughly enjoyed his reading based on the tale of obtaining a fiberglass "dancing canoe" used in the 2010 Winter Olympics.

Bernice Lever read a couple of her humourous poems and encouraged all writers of the wealth of Canadian material as well as the generous support of our government through grants and recognition of Canadian authors. 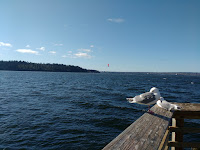 I then attended A Writer's Life with William Deverell. I was most impressed with his willingness to read from his first diary. He seemed to get a great kick out of rereading his earnest first attempts at writing and love. He also shared the story of getting into publishing through the Seal First Novel Award in 1979. He won $50 000 and was flown to Toronto to accept his prize and promote his book. The organizers were a bit worried about his "West Coast" appearance and the fact that he enjoyed a few drinks on the plane beforehand. They insisted he accept the prize in $20 bills and later promoted the book to booksellers and the press by sending copies of his book Needles complete with a hypodermic needle. Wow! Publishing certainly has changed. 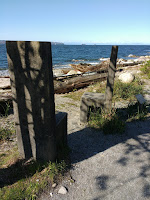 At 1 p.m., there was a free lunch and Writers Cafe. Attendees were invited to eat with the authors. My friend and I sat with Sanford Osler and were able to ask him any question we liked. After this, we were a bit wiped and took a walk on the incredible Sea Walk in West Vancouver.

Finally, I returned for The Rule of Stephens with Timothy Taylor. Governor General Award nominee JJ Lee interviewed Taylor on the writing of his newest book and the stories behind the story. Lee is a warm and energetic interviewer with years of experience at the CBC.

It was an inspiring day and I hope to see you next year to participate in the 20th edition of the North Shore Writers Festival.

Email ThisBlogThis!Share to TwitterShare to FacebookShare to Pinterest
Labels: writing