This novel by Wallace Stegner was first published in 1967. Retired couple, Joe and Ruth 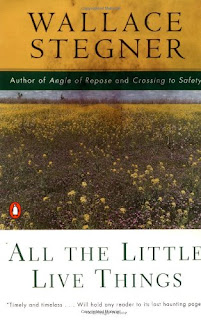 Allston, move to the country in California to rest and try to recover from the death of their son. They are distant with their neighbours until Marian and John Catlin move in next door. Joe is instantly attracted to Marian and her optimistic, firm belief in the goodness and perfection of nature. He loves to argue with her and soon comes to feel that she is the daughter he's always wanted.

In opposition to all Joe values, a young hippie, Jim Peck, asks to squat on Joe's land. Joe wants to say no, but Jim has some sort of power over Joe, in that he reminds Joe of his son, Curtis. Jim is quick to disobey every rule Joe makes. He steals electricity and water, throws his garbage all over the place, has several friends move in, and builds himself a treehouse, when all Joe agreed to was a tent.

I found it difficult to empathize with Joe until he met Marian. His love for her and his devotion to her family when they discover her secret is admirable. Yet, I couldn't help wondering if Marian he would have loved her as much if she wasn't about to die. I never understood Jim Peck. He seems to be there as an annoyance to Joe whom Marian tries and fails to redeem. Most of the characters in this book are difficult to like. Ruth and Marian are the exceptions. I kept wondering what the book would be like if it were told from their points of view. Even Joe had trouble trusting his own perceptions.

Most of the book is within Joe's thoughts, feelings and ideas. It goes against everything I've learned about writing fiction. Yet it won The Commonwealth Club Gold Medal. It makes me wonder if fiction has really changed this much in 50 years. Perhaps it must when we consider how much the world has changed in that time. I learned a lot about the flora and fauna of California.
Posted by Samantha Adkins at 16:05