Juvenilia is the word used to describe Jane Austen's early works, specifically those written when she was a child.  I have a beautiful copy of some of them in a book I picked up at Indigo called Jane Austen: An Illustrated Treasury. 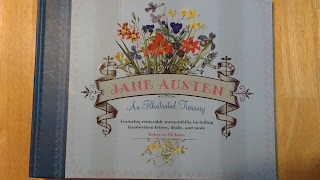 This is one of her more well-known pieces of Juvenilia titled The History of Enbland from the reign of Henry the 4th to the death of Charles the 1st By a partial, prejudiced & ignorant Historian.

The other night, my daughter was very excited about an idea she had for a book.  I encouraged to her to get right to work before she forgot anything.  Then I remembered that I had written my first "novel" when I was in grade 6, the very grade she is in now.  As soon as I told her, she begged me to find it, so I did.  Here is a photo of the cover page: 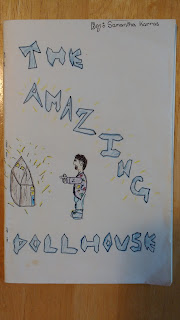 Naturally, the kids wanted me to read the book, so I've begun reading a little bit each day.  (By the way, the boy is pointing at the doll house, not trying to shoot it, as my kids first thought!  Also, the shirt was very fashionable in the 80's!!)

The kids are adamant in their praise of my early writing and perhaps this has coloured my view a little, but I have to admit, I'm enjoying the read.  It's full of cliches and the word "stupid" (which I censor as I read).  There are also large holes in the plot and it probably draws richly on what I was reading at the time, but it is fun and imaginative.  It's what made me want to become a writer.  In case you are intrigued, I'll give you a little excerpt.  I hope you'll forgive me for fixing the spelling and grammatical mistakes.  I can't help myself!

Chapter One: The Fall

"Tommy Manning, come downstairs or you supper will get cold!"

"Mom, I can't come downstairs.  I have to finish building Melissa's doll house."

"Don't keep giving me that ridiculous excuse.  Now either come downstairs or turn into a skinny pencil!"

I guess there's no use fighting with my mother, but the truth is, I'm really not working on this stupid doll house.  I'm actually planning an escape route for when my mom's idiotic 13-year-old cousin comes.  Her name is Sophia Keople and she's a real drip.  I don't exactly know her, but she's an A++ student.  Ugh!  Well, I better get down for supper, or else!

That night, I wake up from brain pain.  My head isn't broken in half, don't worry.  It's that I suddenly remember I forgot my homework.  I decide to sneak down to the kitchen and do my math.

As I walk downstairs, I can hear my sister singing in her sleep.  She's no Whitney Houston, that's for sure!  I also hear other neat noises that you can never hear in the daytime; like the hum of the refrigerator, the rumble of the heater and the snoring of the cat.  What?  The cat snores?  Gee, this is really weird!

Then next morning, when I wake up, I can hear my dad singing in the shower, and he's no Kenny Rogers either!  I decide to put on my mini headphones and listen to some real music!  As I start up the stairs again, my sister Melissa comes running down, yelling and screaming.  I try to stop her, but all that does is put me into a nosedive and pull me down too.  The next minute, everything goes black.

I seriously used a semicolon in grade 6?  Even now, I am wary of them:)

So, thanks to my grade 6 teacher, Mr. G, who inspired us by reading his own novel, set in South Africa where he was from, and then told us to write our own.  I relished this project and haven't really stopped the assignment since.

Posted by Samantha Adkins at 10:41