Review of The Blythes Are Quoted by L.M. Montgomery 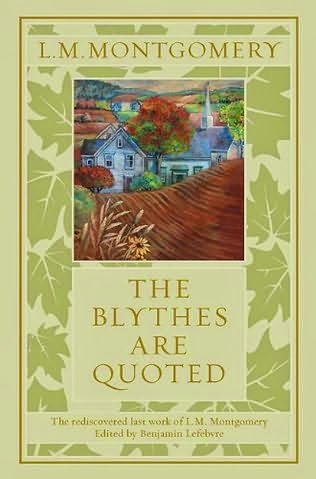 This is an odd book in many ways.  It is the last work L.M. Montgomery submitted for publication
just before she died on April 24, 1942.  It is a collection of short stories and poems that are broken up into two parts - before the war and after the war.  The foreword and afterword both mention how much Montgomery was affected by both world wars and this matches up with the differences in poetry themes between the two parts.

The book is further separated into imagined "evenings", whereby Anne Blythe (nee Shirley) reads her poetry to her family or close friends and records their responses.  There are no responses to the short stories.  I think the reader is to imagine that the short stories are actually real happenings in the lives of the Blythes neighbours and friends.  Each story refers to the Blythe family in some way.  At times, these references are a bit overdone.

I enjoyed most of the stories.  Montgomery had a gift for twist endings and a knack at recording small town events from several perspectives.  Some of my favourite stories included Some Fools and a Saint (a mystery/ghost story), The Twins Pretend (a romantic story involving the remodelling of an old house), Fancy's Fool (a ghostly love story), Penelope Struts Her Theories (a humorous tale of adoption), The Cheated Child (about an orphaned boy who must choose his new home), and Fool's Errand (another romantic tale).  They were nice little treats to read, but not as satisfying as either the Anne series or the Emily series were for me.

The poetry was lovely and I could easily imagine Anne writing them.  There were a few dark nuggets, which are always frowned upon by Dr. Blythe (Gilbert).  The most touching and vivid was by far the final poem, which is meant to be written by Anne and Gilbert's son, Walter, and found among his papers after he is killed in the war.  It is quite haunting and sad.  There is certainly a prevalence of grief in the second part of the book.  Anne never seems to overcome the death of her son and there is a heaviness to all of her interactions recorded there.  I cannot help but attribute them to Montgomery's own struggles with depression and sadness in her later years.  It's too bad her life wasn't as happy for her as her books.

Posted by Samantha Adkins at 14:23