The Guidebook to Killing Lions in Africa


A writer friend of mine lent me this book because of the powerful writing.  I’m glad for his   This is Graydon Baker’s first book and is written as a kind of letter to his young son, Lukamay, to tell him about his time as a Canadian missionary to Tanzania, Africa in 2007.  It is written in several forms, there are letters, journal entries and newspaper clippings.  I enjoy this kind of format, maybe because I’m a history and research-lover. 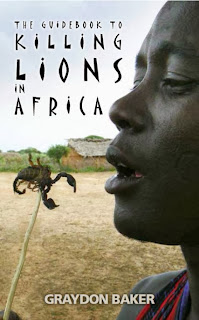 Baker is a master story-teller.  He is an adventurer and seems to have a kind of over-encompassing faith in people and God.  He does things I certainly hope my children never do and at the end of the book he warns his son not to take these experiences as a licence to make poor decisions for himself, but rather as proof of God’s grace in his life and to make good choices in his future.
I was impressed by Baker’s honesty in sharing his mistakes.  I certainly wouldn’t want to release a book to the world with such confessions, but I believe that in doing so, he has presented a much more honest and impactful look at what it is to be a missionary.
I especially enjoyed the letter he wrote to his son urging him to wait for the right woman to marry.  He shared a journal entry he wrote which imagined what his someday-wife would be like, even though he didn’t know her yet.  I think that is a wonderful thing to share with your child.
I did have to put the book away for a month or two near the beginning when Baker shares his story of climbing Mount Marida.  What started as a day trip to the mountain, turned into several days lost on the mountain without food or water.  He and his friend Byron keep pressing on when it was obvious they were not prepared.  I became angry with Baker for taking such a risk.  Having grown up in the Rocky Mountains, I heard too many stories and experienced school mates dying on mountains because they were not prepared, but I’m glad I picked up the book again.  I had thought Baker was being glib about his crazy decisions, but I later saw he regretted his choices but used the story to show God’s grace.
I recommend this book to anyone interested in Africa or missionaries or to those who just enjoy hearing a well-told story.
Posted by Samantha Adkins at 11:30