Lately I have been filled afresh with sadness over the end of my favourite T.V. drama -- LOST.  Probably because it was usually in full steam this time of year.  The last few seasons didn't begin until February and then they went steady until the season finale.  Not this year.  This year, I've had to make do without.

So why would a Janeite be addicted to a violent, fantastical, multi-universal show?  I have no idea.  I thought if I wrote about it, I might figure it out.

So there was Jack, Kate and Sawyer caught in a love triangle.  Jack loved Kate, Kate wavered between loving Jack and Sawyer -- I think she actually loved them both depending on her mood --  and Sawyer mostly loved himself.  Love triangles are certainly common in Austen's books.  Consider Wickham, Elizabeth and Darcy; Emma, Knightley and Churchill; or Willoughby, Colonel Brandon and Marianne.  In Austen, there are clear winners in the triangles and clear heroes, though at first the reader and the characters may be deceived.  In LOST, there were no clear winners.  In one universe, Kate is happy with Jack, in another she is happy with Sawyer. 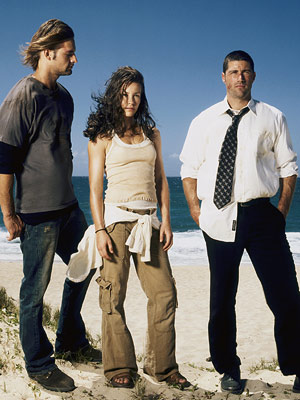 LOST has a very distinct setting.  Though there are flash backs, flash forwards and flash sideways into other times and places, it is mainly set on a magical island.  The island is a character in itself with personality, evil smoke and the ability to move itself to another dimension.  I loved the setting.  I loved the water and the greenery and the beach.  Austen's novels certainly have a distinct setting.  Regency England for the middle and upper classes is filled with charm, intrigue and character.  Though Austen doesn't spend a whole lot of time describing her setting, the movie versions are lovely and comforting.  I can't get enough.

Finally, LOST was an escape from reality - an escape filled with danger, adventure and fascinating characters.  I think it is here that I find my real attraction both to Austen and LOST.  I love Jane Austen characters.  They have backstory, wit, quirks and foibles.  They are so real I speak of them like they are friends.  LOST characters are similarly multi-faceted.  On one episode, they seem saintly, on the next they are murderers and crooks.  One season I cheered for Jack on another, I cheered for Sayid.  Like real people, they have their good points and their bad.  I could believe in them, even if they were battling black smoke.

In conclusion, both LOST and Jane Austen's work ended before their time.  I am definitely left wanting more.  I will have to make due with writing sequels and prequels to sustain myself. Expectations: A Continuation of Pride and Prejudice
Posted by Samantha Adkins at 07:50